African Wanderer Tours and Safaris is a small tour operator run by Emma and Anton Roberts based in KZN, South Africa. We offer quality tailor-made tours throughout South Africa and into neighbouring countries, as well as some great local tour itineraries direct to the public and to Travel Agencies worldwide. With nearly two decades of experience, you can be sure of exceptional knowledge and service.

Anton Roberts took to tourism in 1998 after a short term in the army and a spell working odd jobs trying to find something that he enjoyed. He qualified as a tour guide and bought a ‘kombi’ minivan, whereupon he began doing safaris to various parks and reserves and day trips as a freelance guide.

Working with various wildlife film crews, researchers from all over the world and photographic clients Anton gained experience on all levels of tourism, conservation, film making and photography. 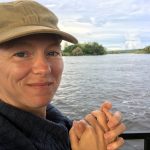 Emma Roberts traveled to South Africa from her native UK in 2001, where she met and married Anton and they set up the tour company shortly afterwards.

They have been running the company together since that time, with Anton often guiding the tours with his passion for wildlife and Emma at the ‘front desk’ corresponding with clients and providing office support.

12 years ago we moved to Hluhluwe and started up our own accommodation establishments:

Umkhumbi Lodge is a family friendly lodge with 2- and 4-sleeper air-conditioned chalets offering a comfortable stay on a small game farm in beautiful surroundings. Go to Umkhumbi Lodge website.

Albizia Camp is a rustic bushcamp, perfect for a wild camping experience. Find out more.

The original African Wanderer Tours and Safaris was the brainchild of Roy Van Vuuren who sadly passed away at the end of 2017. He had been based in Viljoenskroon in the Free State running a successful inbound tour company when we (Anton and Emma Roberts) met with him in 2001.

We were a young couple in the process of starting a tour company and together we decided to expand the African Wanderer brand into KwaZulu-Natal where we were based.

Both branches have been operating tours and safaris from that date onwards, but after Roy’s passing in 2017 the original African Wanderer ceased operations.